More on my account of the tours we did while in El Nido. We really enjoyed the island hopping the day before so we signed up for another one, this time we tried Tour C. You may want to read my post about Tour A.
HIDDEN BEACH
Partly obscured by rocks, Hidden Beach is tucked away in a secluded spot and boats can go in if the tide is high enough to allow for passage. The seas were a lot rougher compared to the day before, so our boat docked at a safe distance and we had to swim past the big waves to get to the Hidden Beach. 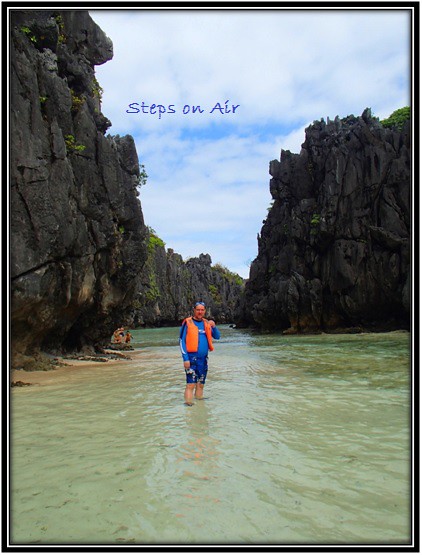 The entrance to the Hidden Beach, its crystal clear water and looming cliffs made braving the waves worthwhile.


UNEXPECTED EVENTS
Once again after defying the waves and safely in our boat we are ready to go. As the engine started to roar the captain pushed the handles for full throttle and we all expected the boat to move forward but nothing happened! We are stuck. After a few more maneuvers, one of the crew dived into the water to investigate, the anchor is firmly latched onto a large rock and would not budge. Because of the big waves the crew wanted to securely fasten the boat and did a wonderful job. The boat was anchored securely. The anchor was in too deep that it was difficult to untangle it without a scuba gear. Instead of losing more time, the captain decided to cut the ropes holding the anchor and leave it behind. I did not know this but a boat has two anchors to keep it steady when docked, one in the front and another one at the back. The anchor that we left behind was the back anchor.

Another unforeseen event was that the ocean was getting rougher. Fortunately the captain is a seasoned navigator and he will slow down or speed up the engine depending on whether we are on the trough or on top of the wave. He was coordinating with the waves instead of fighting against them.

If you look at the bottom photo closely, it shows a guy lying face down at the front of the boat. My initial thought was, he is there to even the weight in case a big wave can possibly tip the boat over. Then my husband commented that he may be not feeling well and is lying like that so that it is easy to throw up in case he gets sick. Seems like a plausible explanation too. What do you think?
The boat in the photo struggled as it is a smaller boat. I think it’s a private tour with 4 passengers and 2 boat crew. According to our captain, he doesn’t recommend going in a small boat around December or any month except April and May when the seas are calm.
We missed out going to Matinloc Shrine because of the said events. Hence, the strikethrough of the word “Shrines” at the title of this post 🙂
LUNCH at STAR BEACH
The morning adventure left the crew and passengers tired and hungry so we decided to head for lunch. The skies had darkened as we disembarked and parked ourselves at star beach. 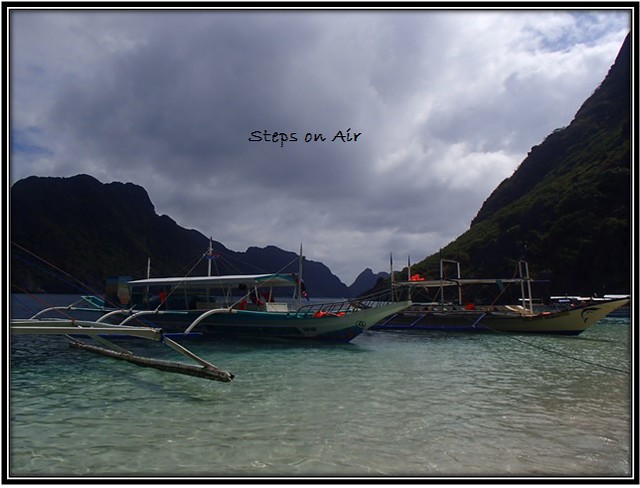 While waiting for lunch we did some snorkeling. We brought our own snorkeling gear but the tour operator can supply you with snorkeling masks and flippers for Php200.


Lunch is part of the tour package. I was too busy enjoying it that I forgot to take a photo. We had some grilled pork, steamed crabs, grilled fish, rice, cucumber and tomatoes, watermelon, pineapple, and soft drink.

SECRET BEACH
If going into the Hidden Beach was a challenge, getting into Secret Beach was even more challenging because of the rough seas. Invigorated from our lunch stop we once again braved the seas. 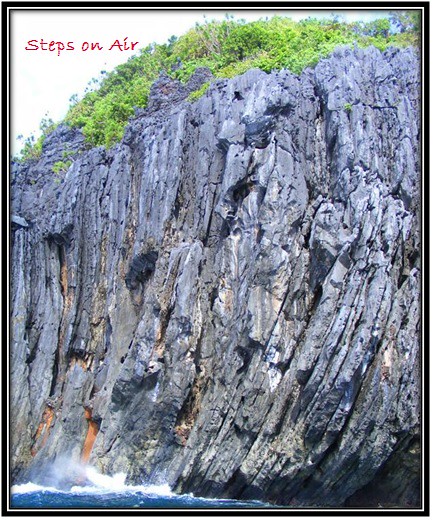 The Secret Beach entrance which we can’t see because it’s a small hole in the rock shrouded by foamy water that forms when a wave smash against the opening. Getting inside was difficult as we have to swim going with the big waves and worked hard not to smash into the rocks. Our boat crew working with the crew from the other boat worked together to get us safely through the small opening. 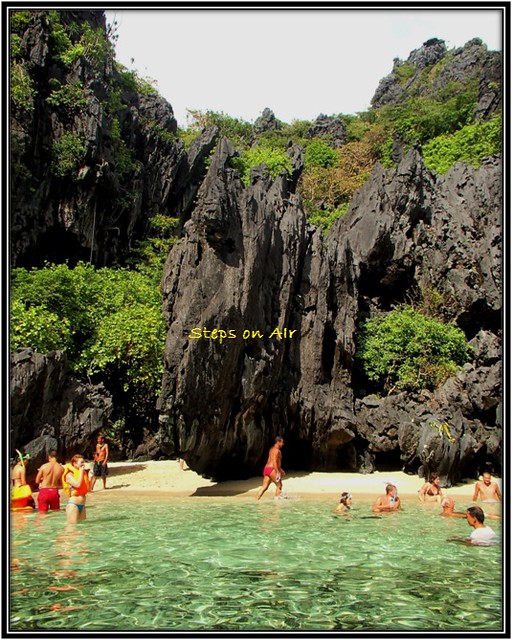 The secret beach is beautiful. Clear waters, powdery white sand and enchanting rock formations are worth the arduous task of getting inside.
HELICOPTER ISLAND
We found ourselves stepping into powdery white sand in a delightful place dubbed Helicopter Island due to its shape that looks like a flying machine it’s named after.

See for yourself how beautiful the island is by the photos below.

I had another long look at the island as the boat headed back out to sea.